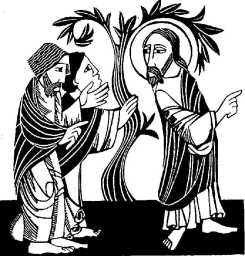 The term “discipleship” has increased in popularity in Catholic circles these past few years. Discipleship is our response to our Baptismal call to follow Jesus, emulating him in thought, action, and word.

Today’s readings remind us that discipleship requires many things, including suffering and service – denying ourselves and following the way of the Lord. Today’s Psalm (Psalm 116) reminds us that God’s strength guides us in our journey, a journey that leads to salvation. In today’s Gospel (Mark 8:27-35) we witness the tension that existed among the first followers of Jesus regarding a different dimension of discipleship.

WHO DO THEY SAY THAT I AM?

In this Gospel, Jesus gives his disciples a little pop quiz to see if they have been paying attention to what he has been trying to teach them. By asking the question “Who do they say that I am?” Jesus gets a sense of how people understand his mission. The disciples responded that most people saw Jesus as John the Baptist, Elijah, or one of the prophets. But here is where the pop quiz gets tricky: Jesus asks his disciples “But who do YOU say that I am?”

Peter nailed the quiz. He responded “You are the Christ” (the anointed one, the Messiah they had been waiting for). Peter was correct, but there is more to the story …

Jesus described characteristics of a Messiah that the people found uncomfortable. He described a Messiah who would be rejected, would suffer and die, and then rise in three days. The crowd was expecting a more powerful and triumphant Messiah. To many (including Peter) what Jesus was describing was a “failed Messiah.”

Peter reprimands Jesus and an argument ensues between the two.  When things calm down a bit, Jesus uses this incident as a “teachable moment.” He teaches that discipleship means not only emulating Jesus, but following the same path as Jesus – no matter how difficult that path may be, or how different that path may be compared to popular standards. As disciples, it is not enough to be like Jesus; we have to follow the same path as Jesus.

Jesus is the very model of discipleship (he follows the path laid out by his Father). What Jesus teaches us from today’s Gospel is a different dimension of discipleship: suffering and death, that will ironically end in a totally new way of life for us. Armed with this perspective, we understand something the early disciples did not understand.

It’s like what we hear repeatedly during the season of Lent: Repent and live the Gospel (turn away from sin and follow the same path as Jesus). That’s the calling of a disciple.

WHO WILL THEY SAY THAT I AM?

Today’s Gospel reminded me of one other thing: the late Judy Combs. I am certain many of you know Judy. She was an active and engaged member of St. Joseph Parish. She was a beautiful soul with a mischievous twinkle in her eye, and the fire of Jesus in her heart.

Six years ago, Judy approached me and asked me to compose a song for an ACTS retreat she was supporting. The theme of that retreat was based on today’s Gospel (“Who do they say that I am?”)

I wasn’t excited about writing a song at the time, but let’s just say that Judy was persistent and persuasive. (Judy wasn’t the kind of person who would follow up with a cordial “How is the song coming along?” She was more direct, asking “When will I see the first draft?” and reminding you “That song won’t write itself, you know.”)

So, I took the theme of the retreat and tried to give it a contemporary spin for the song Judy requested. The chorus of the song was very simple. It was Jesus’ voice speaking to each of us today, asking:

The verses of the song reflect on how we intentionally live as a disciple, asking these questions:

Discipleship (the call to follow Jesus) demands a generous response. Mere words and thoughts are not enough. As we heard in today’s Letter from St. James (James 2:14-18):

This is summed up best in a quote attributed to Pope Francis:

You pray for the hungry. Then you feed them. That’s how prayer works.

What a great example of discipleship in action!

This week, I invite you to take a moment to reflect on your life as a disciple. Ask yourself: